As in much of California, we had a wet winter and spring, with close to 20 inches of rainfall. The wet season lasted into June, with several thunderstorms, one of which caused a small flash flood, which fortunately was nowhere near the scale of the deluge in July, 2015. The previous flood control engineering we have done works, and Rev. Seikai added to that this spring after studying the water flow past the temple.  At times during the wet season, the local roads have been closed or restricted to residents of the area. The net result of this has been fewer visitors to the temple, but the extra rain has meant for a luxurious growth of wildflowers and weeds! The wildflowers have been beautiful and the weeds have required repeated mowing to be kept in check; like bad habits, they keep coming back!

Our Spring Retreat in April was well attended by old friends and new,

Rev. Phoebe was driven to Morro Bay and back by Sarah Foland and Ruth Handy respectively to host the Morro Bay Meditation Group Evening on April 24th.  A dozen people attended the meditation, Dharma talk and discussion.  Rev. Phoebe has been visiting the group twice a year for the past couple years and hopes to go again in October. We’re grateful to the group members for the driving which makes it possible for her to go. 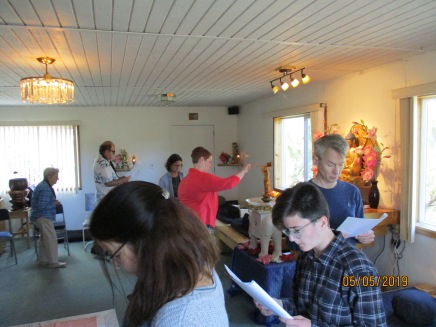 Wesak, the Buddha’s birthday celebration on May 5, was attended by a substantial group of people this year. As usual, we sang the Wesak songs, rang the temple bell 108 times, and processed out to the Stupa to offer flowers around its base. It did not rain, but the spring wind kicked up at that point, and everyone retreated to the Sangha House for a lavish potluck of wonderful food.  Two weeks later on the 19th, Revs. Phoebe and Seikai attended the “Buddha Day” festival at the Thai Buddhist temple in Goleta, next door to Santa Barbara.

There were about 15 monks present, seven or so monks of both the Thai and Tibetan Buddhist traditions, several of whom live in or near Santa Barbara. There was a good-sized group of people who attended a dialogue/forum at the end of the gathering. Members of the audience posed questions to the monks, who took turns answering. Several people thanked our two monks for their contributions to the Q&A, saying it was helpful to have Buddhist teaching expressed clearly in English. The Thai temple is hoping to hold follow-up events like this one in the future.

We’ve had a number of visitors this spring, including Rev. Master Haryo, head of the Order of Buddhist Contemplatives, and Emmy van Woerden, Rev. Phoebe’s sister. Emmy has come twice before, and her visit occasioned a trip to Ganna Walska’s Lotusland in Montecito. Lotusland was the estate of the former opera singer, who converted the property into magnificent gardens. We were too early for the lotuses, but many of the exotic plants found there were in bloom—and the weather cooperated.

On June 2 our annual board meeting was held, with several members present. We discussed past and future changes to the temple, noting that there was a period of time about a decade ago when we made numerous changes to the temple facilities, expanding the boundary of the conditional use permit area, building the stupa and the meditation huts, etc. Since then, as the monks have aged, we are less inclined to tackle such large-scale projects. However, our original conditional use permit (CUP) was for 20 years, and is expiring next year! So the question was posed whether or not to renew the CUP—which everyone agreed would be good to do. To renew it for another 20 years—or however much longer we remain on this site—will involve submitting a pile of paperwork to Ventura County, showing that we are in compliance with the terms of the Meditation Retreat Ordinance, under which the CUP is issued. We met with the Ventura County Planning Dept. to get an outline of what needed to be done, and our member Jack Collings came to that meeting, offering to help out with the nitty gritty of submitting all the necessary paperwork, an area of expertise that he works in as a fire safety engineer. Our grateful thanks to Jack for his help and to everyone who in any way has played a role in making it possible to the temple to exist here for 20 years and to prosper.