Now that fall has come and summer is fading away, we look at the daily calendar and see that many people came for retreats and visits in preparation for a month (August) without temple time. In July, the festival of Kshtigarbha, the Bodhisattva of Optimism and Courage who also is our temple’s protector, was a good occasion for several members and newcomers to meet and share a delicious lunch.

Our last and old cat Nellie died very quietly on July 18th.  She had been slowing down for several weeks and clearly was nearing the end of her life, yet was still very happy to see us several times a day.  Even though she had stopped eating and moving, she still purred until a couple of hours before her end.  She was given a cat size Kesa and buried in our animal cemetery.  Nellie had been given to us as a kitten and she was devoted to Rev. Seikai.  From the first she chose to live in the workshop, where she had her own corner, with a bed and later a set of stairs to get up to her spot by the window.

On July 28 Marcia Roberts was the only one present of the group of old friends who have been coming annually for about 25 years to bless the memory of Patrick DuBray and his father Dick. Marcia’s devotion and loyalty are amazing.

The monks started their rest period with a whale watching trip in the Santa Barbara Channel. The boat followed a pair of humpback whales and some dolphins for a while; there were sea lions near the harbor entrance and the usual wide assortment of sea birds.  As always, it was wonderful to be at sea for a day.

The monks were able to travel for two weeks, thanks to the kind help of Dorothy Scovil, her friend Karen Hillman, and Karen’s daughter and son Joy and Diego from Ventura. They took turns looking after the temple, and enjoyed being with our two dogs and the fish. Meanwhile, both Rev. Phoebe and Rev. Seikai went on hiking trips and came back refreshed and rested.

Robert DeLoach very kindly came over for a whole day in late August and did a good job deep cleaning the common room, and helping Rev. Seikai with some repair work.  It is encouraging to have help with temple maintenance, which of course is unrelenting, and the monks generally have as much as they can handle in the way of temple upkeep. 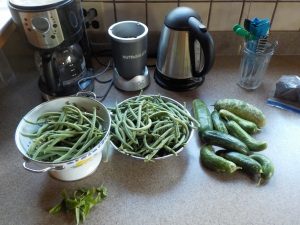 It was a good year for green beans, cucumbers and carrots in the garden. Tomatoes, and everything else we tried to grow, never made it to maturity, having been discovered and devoured by rodents and various other critters.  We had a population explosion of wood rats this year; they took up residence wherever they could, crawl spaces being their favored habitat. A few moved into the workshop and even chewed through a water hose in our car.  To combat the invasion, we placed sound-producing rodent repellers in key spots, and Rev. Seikai used a live trap to capture and deport at least ten of the little darlings.

The first weekend in September saw several of our regulars back, as well as a few new people, and the Ventura Meditation group meeting was very well attended. 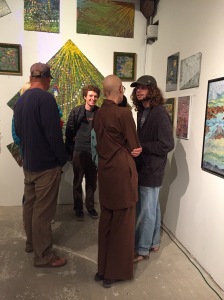 Rev. Phoebe was invited to show some of her paintings at a Show at Art City Gallerie in Ventura, together with 6 other artists. from September 16 to the end of October.  Several of our regulars joined the many visitors at the opening reception, enjoying live music and beautiful art. 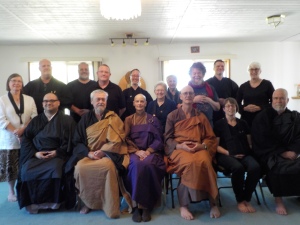 We enjoy sharing Pine Mountain Temple with other Buddhist groups which lack the kind of facilities that we have. Last June the Blue Cliff Sangha under the direction of Rev. Myoun (James) Ford came for a three-day sesshin; there were about 15 retreatants altogether, the sesshin went well, and they expressed enthusiasm about returning in the fall for another retreat. In late September, as this newsletter is being printed, the Blue Cliff Sangha will again hold a three-day sesshin, from the 20th—23rd.