Al Cruz, born in 1936, died on July 28, 2016, in his home in Bakersfield.  We were notified of his death by one of his many nieces: Al came from a large family and grew up in Oxnard.  He was a member of the Santa Barbara Buddhist Priory years before the temple moved to the Ozena Valley and became Pine Mountain Temple in 2000. Working at the former State Mental Hospital Al became friends with Dee, and introduced her to the Zen practice at the SB Priory.   Al was a very regular presence at the temple, would come most weekends and attend retreats.  Upon arrival he would invariably ask: “What can I do?”  Later he moved to Bakersfield and continue to come until various health problems caught up with him and he could no longer make the drive.  We miss Al and offer our condolences to his family and friends.  Al had always spoken fondly of his practice and so his family arranged for a funeral and burial of his ashes at the temple, on October 2nd.  Twenty people came and many spoke of their memories of Al’s kindness and steady example in practice.  After the burial we shared a lovely potluck lunch. 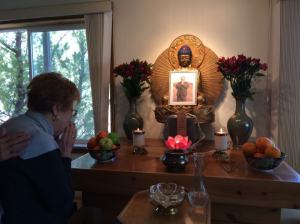 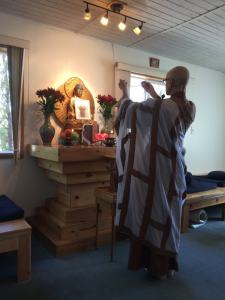